Siri Hustvedt - The Sorrows of an American 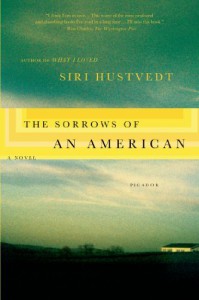 What a terrible title. I’m not with the Anti-Americanism thing. Among products that sell like hot cakes, Anti-Americanism is one of the most insulting ones. Still, the title feels like it came straight out of the American Exceptionalism everyone hates so much. America is an interesting country, sure, but the sorrows of an American aren’t more profound than others.

The novel avoids this exceptionalism, thankfully. In fact, it’s the opposite of what its title suggests. The novel is concerned with the emotional turmoil of many people. It seeks to understand them, even when they’re creeps. I doubt the disconnection between the self-centered album title and the thoughtful story is deliberate, though.

Siri rambles again. There is a center for these ramblings, something resembling plot. The ramblings are also less elegant than that novel about a summer without men. In that Siri could just ramble on and even if it felt like a digression, it was pleasant to read.

Sorrows has an oddly clunky prose. Imagine if someone stuck a lot of gears inside Auster’s writing. This style is supposed to flow easily and be easy to read. If it isn’t, then the abundance of words is frustrating. Why Hustvedt fails here when he succeeded later is hard to pinpoint. Maybe it’s because Sorrows is more descriptive.

Maze of thoughts tend to ramble, but their content always remains subjective. We get a lot of thoughts but few details.Sorrows tries to combine both. Sometimes it works. There are some objects in the story with great importance who needed detailed descriptions. Even there Hustvedt disappoints. She tries, but she doesn’t manage to come up with powerful imagery like McEwan.

There is also a family tree which is hard to keep track of. Here’s a tip for writers. Don’t just give a list of names of who was in the family and what’s their relation to the main character. Simply have them appear when their role in the story is relevant. Unless you’re into the study of naming, a name without something attached to it is a random collection of letters.

She’s better at keeping track of her present-day characters. They drive the story with their personalities and desires. A mystery kicks the novel off but it’s pushed to the side. Even when it’s solved, the resolution only exists to put all the characters in one place and have them clash. This is more exciting than just solving a murder mystery. Hustvedt has the tools to produce a nice psychological thriller.

The best parts is how she treats characters who otherwise would’ve been antagonists. The characters who create conflict, bother the protagonists and otherwise ruin everything for everyone aren’t defeated. The end of the conflict is understanding how the others think and why they do what they do, even if we still disapprove. In fact, we can’t really disapprove of someone’s behavior if we don’t understand it at first.

This is where Hustved deviates from Auster. Auster’s novels are a self-centered psychodrama. He traps you inside a character’s head and only shows his point of view. We’re not meant to necessarily side with the protagonist, but examine his flaws and strengths. Hustvedt wants to examine a large cast. It’s more admirable, but she’s not as successful as Auster is at his game. It’s the clunky prose again. The smooth prose is also what brought the characters in Summer Without Men to life. If only that one was as long as this novel.

Some have complained Hustvedt’s male protagonist sounds like a female. I found it so surprisingly male I wanted to take off points for it. Hustvedt’s prose is so similar to other male writers, but there’s not a touch of femininity in it. She writes it with a straight way and doesn’t show the female’s spin on it.

When Hustvedt describes how the protagonist lusts after a female, I almost felt like I’m reading another male author who needs to let out his fantasies. Hustvedt never crosses the border. She only describes the female the protagonist notices, and at points where he’ll notice something specific. One thing that Hustvedt describes well is those little moments where you notice a woman’s leg or hair or arm and aroused by it.

It’s not ‘wimpy’ or other such macho bullshit descriptions. Guys need girls. I’ve seen a lot of macho dudes who work so hard trying to achieve positive feedback from females. Without it, they’re nothing. Sexuality makes fools out of us all. Most people who are cool about it just happen to have it at the moment.

Hustvedt still sounds like Paul Auster in Sorrows, but that’s okay. Her attempts at understanding others and her wider scope means a different spin on that style. Without Auster’s smooth prose, though, it goes nowhere. The irony is that Sorrows has more purpose and a better story than Summer, but its prose keeps all the events distant. I’m still interested in what else Hustvedt has to offer, but this isn’t her masterpiece.