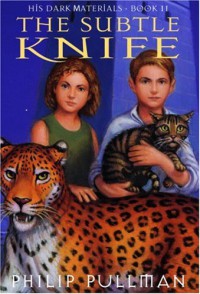 Opening a portal to our world was a pretty bad idea. It causes some bad stuff to happen to our characters, but that’s okay because they’re just characters in a novel. It’s bad because, somehow, more cliches came out and infected this series. They don’t overwhelm it – there’s a scene near the end which defines exactly what Pullman is good at, but it does its harm.

Will is the biggest problem, and for a character who takes the center stage is pretty lazily written. Will is a tortured anti-hero who, aside from feeling pretty shitty from time to time is doing pretty great. Unlike Lyra, who has personality flaws that hinder her progress from time to time and thus make her interesting, all Will has is a ‘troubled past’ which makes him feel bad. Pullman doesn’t completely drop the ball with him, and he does write scenes where Will is not doing so great, but mostly he just feels bad all the time. The only thing that holds him back in the book is a nasty wound, and that’s an external thing, not a personality flaw.

Lyra suffers from his presence, too. She’s still an interesting character, with charming qualities and flaws in her personality, but Pullman turns her into Will’s sidekick. Whenever she takes the stage, it’s great. There’s a scene where Lyra fucks it up pretty bad, but about halfway through she decides – or at least Pullman does for her – that all she will do is help Will. Lyra does have a case for idolization, like she did for Iorek, or the witches but it makes little sense here. Iorek is a huge, strong and alien creature. The witches are powerful and older than your used Volvo. Will is a child like her. A troubled past is nothing to idolize, and while he can fight, he doesn’t have the commending personality of Iorek or the wisdom of the witches. Yet, this rebellious girl now exists only to help him.

Like in the first book, Pullman is much better at ideas than plotting. His plot still feels like a C-RPG of sorts. The character go there, receive that item, use it to advance to the next level and so on. There are less scenes this time where characters interact and let Pullman explore various ideas, but the few there are here are actually better. One good example is a conversation between two doctors, one of which is aware of the novel’s plot and the other isn’t. The one who isn’t will clearly damage our heroes’ journey if he gets his way, but Pullman doesn’t paint him as a villain or a terrible person. He’s merely ignorant of the main plot, so it’s perfectly reasonable from his perspective not to care about all these big events and Plot Coupon collecting. There’s also a scene where he starts to agree with William Golding in the whole adults vs. children discussion (In fact, parts of this book can be isolated and be turned into a nice retelling of Golding’s classic)

He also didn’t fall in his treatment of violence. The Subtle Knife has more gore than its predecessor, with more battle scenes, chases, and character deaths. He still refuses to sensationalize it, and even if Main Characters have to hurt others to advance in the plot, it’s not viewed as totally justified. When the main characters end up hurting some people in order to get the knife, the moment is not very celebratory. Instead of celebrating our heroes’ success, Pullman shows us how it affected others. The best scene in the entire book is when a character has to fight off a lot of mooks. Even if they exist solely so the guy would have something to fight, he doesn’t remain indifferent to the violence. Mooks, in reality, don’t exist. They’re still human beings, and even if they appear for barely a paragraph, The Subtle Knife and its characters acknowledge it. Perhaps parents should stop demanding non-violent content, and instead ask for books like this, which don’t treat violence as just a tool to advance the plot.

Pullman’s strength and weaknesses remain the same, aside from weaker characterization. If he didn’t drop the ball with Will and Lyra, it would’ve been just as good as the first. This is still a very good book, because Pullman doesn’t succumb completely to the new tropes and lets the characters occasionally act beyond “Sad guy” and “Hero’s Sidekick”. The direction was wrong though. Let’s hope he fixes what was wrong in the climax.